Silver medal at ApiMondia 2019 in Montreal
DALINNO travelled to Montreal in Canada to the 46th ApiMondia to participate in the WBA (World Beekeeping Awards) in class 48, Inventions.

The judges saw the same potential in our frames as we do and we are proud to tell that the DALINNO frame ended up winning the silver medal! 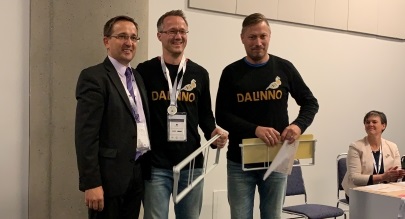 All you have to do is to remove either all of the stabilizing lists or just one on each side of the slit.

Show in Stuttgart
Saturday the 27th of October we went to Stuttgart to visit our German distributor at the show “48. BERUFSIMKERTAGE DONAUESCHINGEN 2018”.

It was a very impressive and large show with many different exhibitors. We had a lot of fun at the “Der Original Honingmann” stand talking to beekeepers and giving away brochures and free frames for them to try out.

The DALINNO frames filled almost half of the stand and attracted many beekeepers. Nearly all of them found the DALINNO frames very interesting and cannot wait till they come in different sizes (neither can we).

We also met surprisingly many Danish beekeepers at the show and I don’t think it is an exaggeration to say that the conversation went more smoothly speaking Danish than Deutsch.

We actually were so busy that the picture below was the only picture we had time to take. 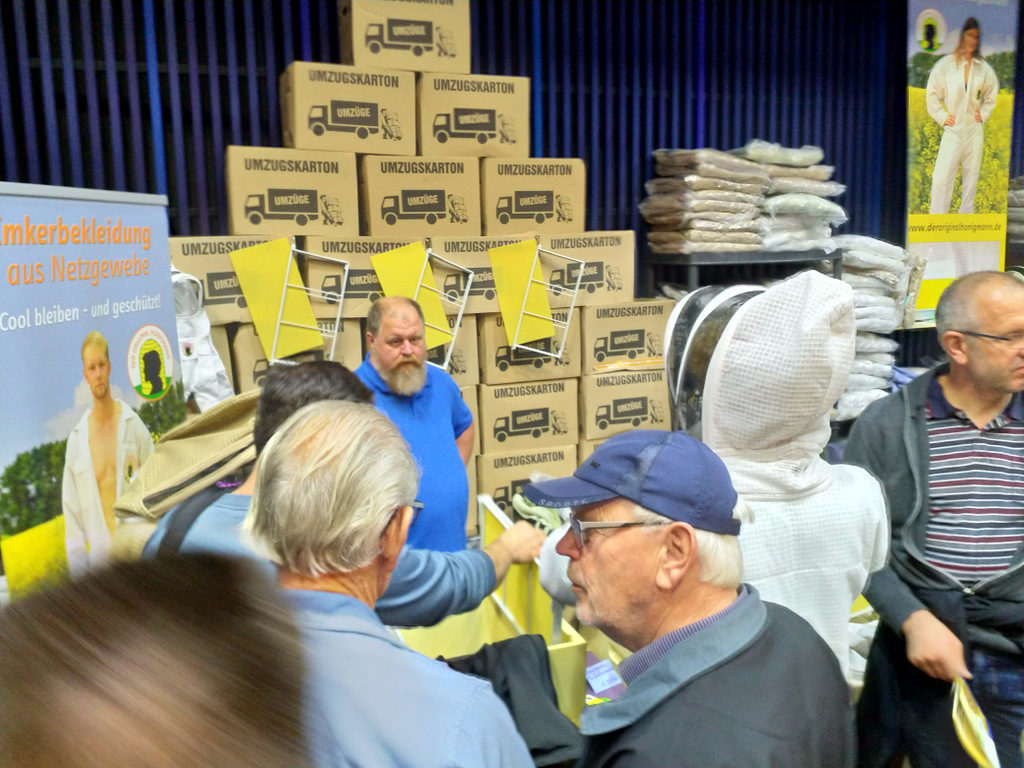 We look forward to visit other shows and present the DALINNO frame and chat with more beekeepers.

8 days
The picture at the top of the column shows the DALINNO Langstroth 1/1 frame after 8 days in the beehive. The bees just loves the DALINNO frames.

As you can see in the picture below, the larvae also thrives in the DALINNO frame. 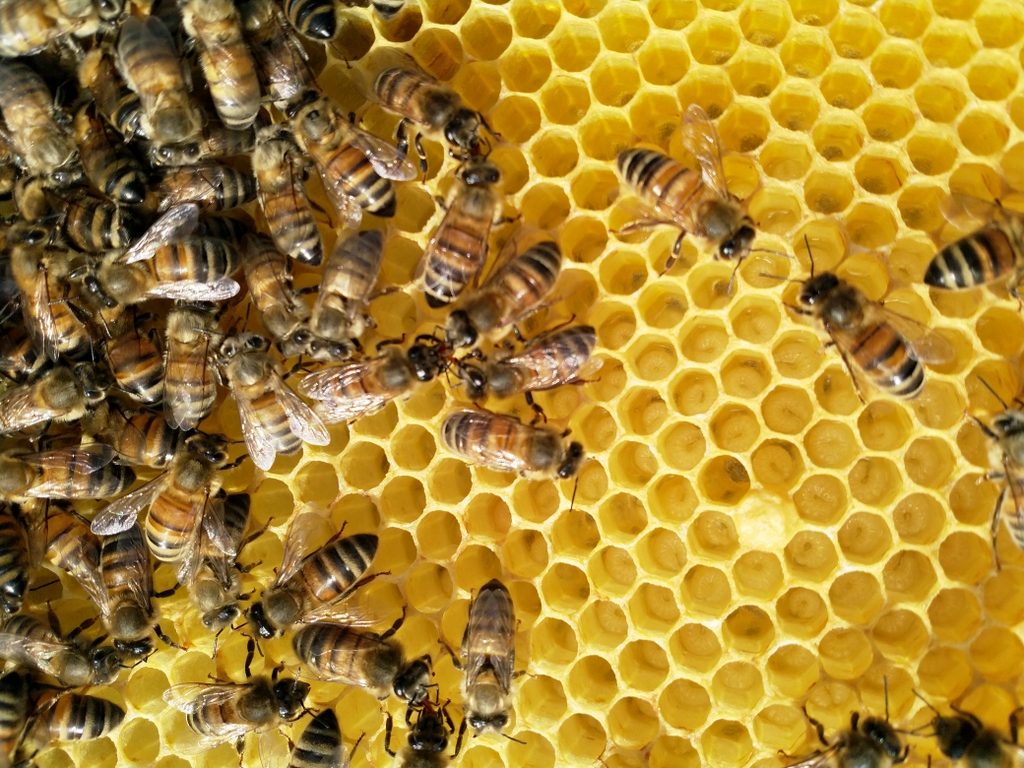 Melting the wax and cleaning the frames
The 20th of April 2018 we visited Max (the owner of bibutikken.dk) and Allan, who had agreed to help us test the DALINNO frames.

The frames went through all the steps from the steam wax melter to high pressure cleaning, all this to make sure that the frames can endure the rather rough treatment.

As expected, after the test the frames looked  exactly as before the test.

Fighting the varroa destructor mite with the DALINNO frame
This is a picture showing the DALINNO frame with two of the stabilizing lists removed, one on each side. As you can see, it is quite easy to remove 1/3 of the wax foundation. 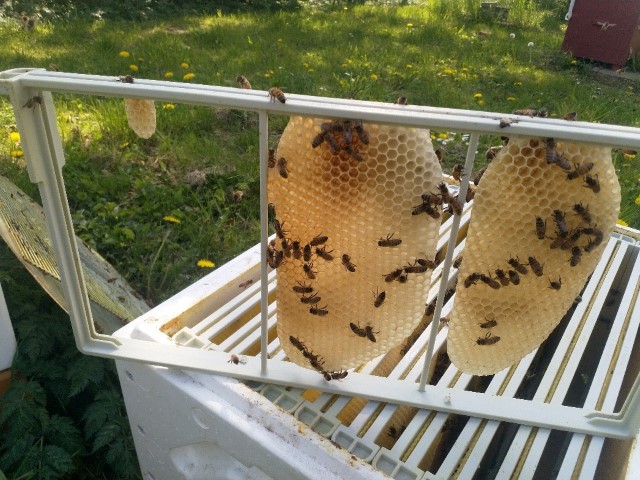 The second picture shows a DALINNO frame with all four stabilizing lists intact. It is still easy to remove 1/3 of the wax foundation. 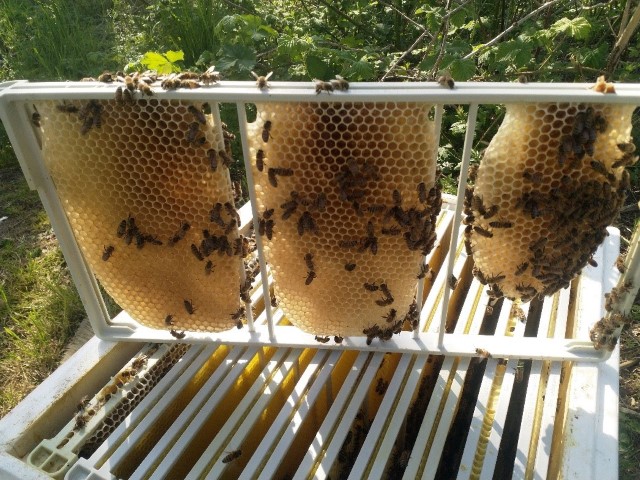 Beekeeping
All beekeepers know that there is a lot of time consuming work during a season and especially at the start of the season and during the period when the bees collect honey. One of the biggest time consuming tasks is when the frames are to be prepared for the season start and when extra magazines are added to the beehives.

Preparing wooden frames
When the wooden frames have returned from being washed and are prepared for the new honey season, they must first be reviewed for defects. Some wooden frames must be repaired while others are so broken that they have to be discarded. The metal wires have to be tightened on most of the frames before inserting the wax foundation.

There may also be frames on the edge of disposal because they have become skewed over time, mainly resulting from the washing and tightening of the metal wire. When these frames have to be fitted with the wax foundation, it causes extra work, because the wax foundation has to be cut to fit into the wooden frame.

The invention of new frame
As the work on preparing the wooden frames is so time consuming and boring, I came up with the idea of ​​a new frame where you do not need to use any time to prepare it. This succeeded beyond all expectations, and with the DALINNO frame, all the annoying and time consuming work preparing the frame is gone.

Construction of prototype frames in plexiglas
I designed 11 prototypes in plexiglas and they were all used in a beehive at the start of the honey season 2014. One was put in the brood magazine and the remaining 10 in a honey magazine.

All 11 resulted in a perfect result: The frames in the honey magazine were filled with honey from corner to corner and the frame in the brood magazine was also filled with larvae.

Some of the prototype frames have now been sitting at the bees for 3 – 4 seasons, with the same perfect results every year.

From prototype to production of the DALINNO frame in plastic
My 2 sons and I have been working for 4 years to develop and patent the DALINNO framework, and we manufacture and sell them now through our company DALINNO.

The picture below shows the very first produced DALINNO frame. 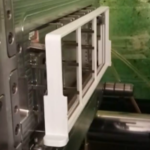